I hadn’t noticed that the patient was sunburned until we started positioning. The oximeter had fallen off the finger and the assistant was leaning on the BP cuff whilst tucking in the warming blanket. All you would need is the nurse to ring from recovery to ask for a mod for the parturient with a BP of 100 and everything would be completely normal.

The title of the post rather gives it away, but at the start of a crisis it can often be difficult to realise that it is even happening. The thing that made me reach for the adrenaline was that I noticed that the ETCO2 was low.

Here is a portion of the anaesthetic record, reproduced with permission. The jagged parts are artefact.

The ETCO2 is the gray filled area at the bottom, with units in mmHg. Initially the patient was mask ventilated, which is why the trace has gaps in it. The green line is the plethysmograph amplitude. You can see that by 8 minutes after induction both the CO2 and the plethysmograph amplitude are dropping. The purple syringes are doses of adrenaline. The CO2 immediately rose with the first dose. Just as I was giving the adrenaline the trace was starting to show bronchospasm—which went away immediately.

The agent responsible was found to be rocuronium. Apparently the rate of rocuronium anaphylaxis has increased since COVID, which the allergy specialist thinks might be a result of greater use of cough suppressants.

The important take away messages are:

I am not brave enough to suggest that this is the only possible reason, but…

Low cardiac output states can cause hypocapnoea in a ventilated patient because:

Answers can be found in Nunn 8th ed Cap 7.

Do you have the height, weight and ASA… 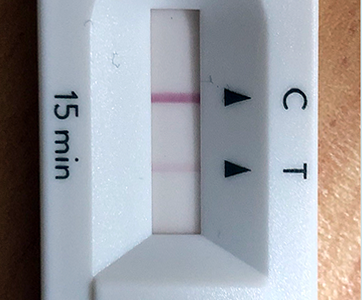 Describe the features of a diagnostic test, including the concepts of sensitivity, specificity, positive and negative predictive value and how these are affected by the prevalence of the disease in question.

Don’t blame me for the LO. In general I think probability testing and correlation are much more important, although they do have one application which is currently topical.

A quote from today’s Sydney Morning Herald about RAT Testing:

Professor Skerritt said it would have been “outright dangerous” to have people testing themselves earlier in the year, when there were fewer cases and health authorities were still heavily relying on contact tracing to suppress the virus.

“You would have had people with false positives, and immediately you also would have missed a significant number of infections,” he told the hearing.

T/F Specificity is affected by the prevalence of disease

T/F If the prevalence of COVID is now 1%, over half of positive tests will be wrong (Use an online calculator for this. You won’t be asked to do the maths in the exam 😱)

Any book on statistics will give you the answers, or even the page on Wikipedia.

A big thank you to Dom Perrottet for making this photo possible.

Earlier this week I did the witnessing for commissioning of some new medical gas outlets. Whilst personally I don’t think commissioning per se is really a primary topic, I thought some photos might be interesting.

The Australian Standard for medical gas supply was updated in 2021, in part to address the issues seen in the Bankstown disaster. The College guidelines contains the new testing requirements under the 2021 standard.

There are a lot of tests involved in testing compliance. The anaesthetist is only responsible for verifying gas composition and the non interchangeable connectors. The hospital is supposed to provide someone with a good understanding of medical gas supply to verify the others. I wonder who that will be 🤣.

Answers can be found in the relevant sections on gas supplies, and also in the College document on verification.

I don’t have time to post regularly at the moment, but I couldn’t overlook such a beautiful illustration of physiology & pharmacology. 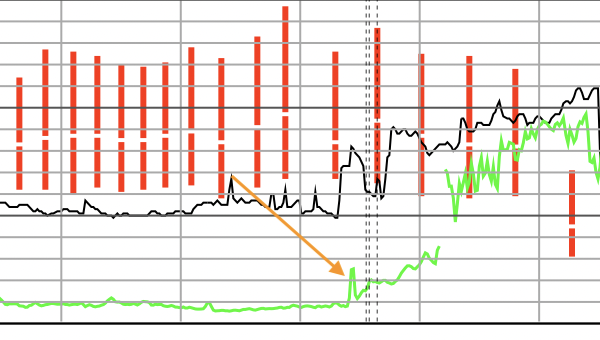 This is part of the anaesthetic chart from a patient having caesarian section under SA. The black line is heart rate, the red bars NIBP and the green line is plethysmograph amplitude.

Why is the pleth amp so low on the left side of the graph?

Delivery was the time marked by the orange arrow. Which of the following drugs could have caused the observed changes? Bonus marks if you can explain why.

This is a weighty tome and no-one would expect you to read it cover to cover. It does, however, have really good sections describing the individual drugs, pharmacogenetics and drugs in pregnancy and lactation. The range of opiates described should also give you an idea of the spread of drugs used across different hospitals.

T/F tramadol is an effective against neuropathic pain

T/F buprenorphine has a ceiling effect for analgaesia, but not respiratory depression

T/F sufentanil has an active metabolite, nor-sufentanil which causes antanalgaesia

Sorry that this is a super last minute post, but I wanted to send a big dose of best wishes to the New Zealand and NSW candidates who will be sitting the vivas over the next few days.

For many of you it has been an unexpectedly long and drawn out process. You are almost at the end now. Time to wow the examiners and then you are done!

I will be thinking of you all and will raise a virtual toast to you for making it to this point in what has been an extraordinary year.

Very best wishes to you all!

For those of you who have chosen to sit the ANZCA primary exam this month, my very best wishes for you with the written component on Tuesday.

I hope those of you sitting have been able to maintain the focus on your studies amid the very unsettled world we find ourselves living in.

Perhaps today and tomorrow are a time to do something solely for you. What is possible will obviously differ depending on where in Australasia you live, but something enjoyable and relaxing doesn’t need to be done far from home.

I have previously written a post on the benefits of taking a short break before the exam It seems as though that post was written in a different world, but the message still holds true.

I will be thinking of you all on Tuesday – best wishes.

We are living in a very topsy turvey world at the moment and I really feel for those of you preparing for the exam. We as human beings are poorly equipped to deal with uncertainty and yet that is what we a faced with constantly at the moment.

Today I thought I would give you links to some study tips I have posted in the past. Many of them relate to our own behaviours and habits, which are things which we still have control over.

Please remember that if you need extra help at this time, ANZCA provides access to free psychological support. Do not hesitate to access this service if you think it will benefit you in the run up to the exam.

Aim to pass the exam rather than avoid failing it – in this post I discuss the influence of a positive emotion on success and there are some tips on how to cultivate these emotions..

Study tip – avoid getting too much of a good thing… – this post talks about the double edged sword of stress. In the current climate, I think that we all need to be consciously addressing our stress levels in order to maintain ourselves in a constructive zone.

Study Tip: Gain knowledge and understanding, not familiarity  – in addition to those who are sitting the exam for a second or subsequent time, this post may be worthwhile for those of you coming back to your studies, by preparing for the vivas, having sat the written in exam in March.

The Primary Exam in just one step on a lifelong path  The words of this post, although initially intended for those who had been unsuccessful in the exam, may provide solace for those of you who feel stuck in limbo this year and had your exams and/or training plans disrupted.

I hope that all of you are able to find some moments of joy in your lives this weekend. Please know that you are all in my thoughts…

Discuss the effects of ageing on the respiratory system.

Increasingly, we are having to anaesthetise older and extremely old patients. It is important to know how their physiology differs from younger patients in order to deliver the best possible care.

BT_PO 1.37 Discuss the effect of ageing on ventilation

There is another post on this topic here and as I mentioned in that post, I think that Nunn’s Applied Respiratory Physiology is the best for this subject (unfortunately the references are dotted throughout the book)

The ventilatory response to hyercapnoea is blunted with ageing T/F

Static compliance of the lungs falls with advancing age T/F

Describe the adverse effects of neostigmine.

Another drug we use on a daily basis (at least where I work as sugammadex is deemed too expensive for routine reversal).

Over 15 yrs ago, (but still seared on my brain) I made one of the 3 drug errors I know of. I gave a baby a 5x excess dose of neostigmine having mistakenly drawn up my calculated volume from the adult rather than baby sized ampoule. One side effect was prominent. What do you think it would have been? It responded very quickly to atropine, which I assumed I had forgotten to give. It was only on inspection of my ampoules once the situation had resolved that I discovered my mistake…

You will find decent information on this topic in any pharmacology text.

Neostigmine is highly lipid soluble, so seizures are likely to occur when large doses are given T/F

Neostigmine may cause diarrhoea T/F

There is another post on this material here if you want some more practice.